My father was a proud paralegal for the NAACP back in the 80s and 90s. He marched in rallies for race equality and was actively involved in uplifting the Black community. When I was growing up, he often had me watch the PBS series “Eyes on the Prize,” which documented the events of the Civil Rights Movement. Nestled inside my baby book is an autograph from Black Panther leader Huey Newton.

When I was a little girl, my dad said, “People will want to label you as only black, but you’re biracial.” My dad wasn’t ashamed of his blackness. Just like many fathers, he loved that I resembled both of my parents. My dad knew the world would see me as more black than white, but he wanted me to identify in a way that honored both sides of my genealogy. This was true even after my parents split up when I was three-years-old…

Last Thursday I attended the Multiculti Mixer in Brentwood, California. The free event featured a reading by well-known actor Taye Diggs who read from his new children’s book Mixed Me, dedicated to his son Walker. This book follows on the heels of its predecessor “Chocolate Me,” Diggs’ children’s book about growing up black. 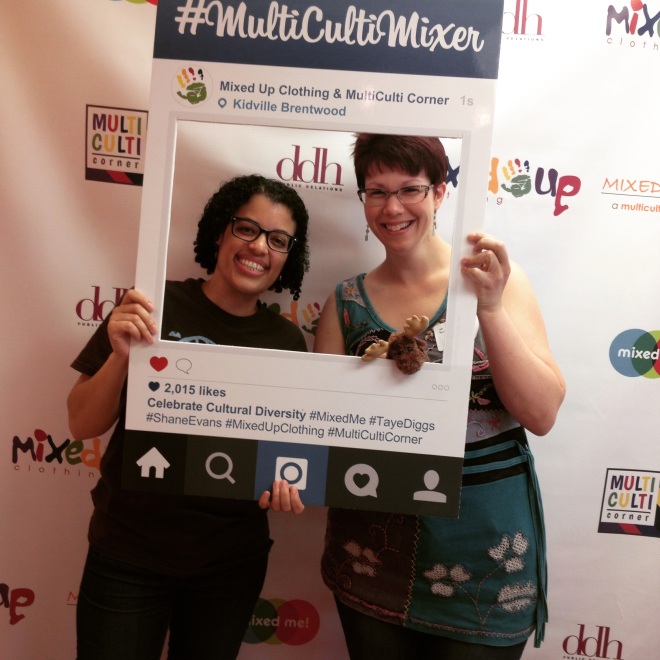 The Multiculti Mixer was a veritable utopia of mixed race belonging. A pretty even blend of adults and children, about 60 or 70 guests packed into Kidville Brentwood for a panel about raising mixed race children, a fashion show by some of the children themselves, and of course the celebrity reading and book signing. My (white) friend and I handed in our tickets — one general admission and one “blogger/influencer” — but once we stepped inside we realized everyone was on equal footing, and we loved it. Kids of all different hues and all different hairstyles ran in and out of rooms, including the arts and crafts room set up just for them. Parents appeared relaxed at not having to anticipate sideways glances or outright stares. Everyone smiled big, and often.

Taye Diggs walked through the front doors during the panel with absolutely no pretension. My friend and I had just taken a picture in front of the event backdrop, and as Diggs crossed the threshold, a little girl squealed and wrapped her arms around him. Diggs didn’t seem to mind. He stood around with everyone else during the fashion show, with his nearby bodyguard as the only visible indication of his status.

Diggs wasn’t the only celebrity present for the event. Biracial Grace Colbert, famous for the controversial Cheerios commercial (controversial merely for featuring interracial parents) attended with whom I assume to be her mother. “I liked your commercial,” I said to her as we stood in line for something or other. “Thank you,” she replied quietly, either tired of the statement or naturally reserved. Either one, of course, is completely valid in my opinion.

The Multiculti Mixer fashion show, featuring garments from Mixed Up Clothing, was the most positive and inspiring runway show I’ve ever seen. Family members and other onlookers snapped pictures, cheered, and clapped as children did spins and twirls down the tiny center of the room. The children pranced with confidence and jubilance that seemed to go beyond the attention they received. Instead, they seemed intimately aware that they were being praised for their appearance in a manner devoid of ogling or exoticizing. They were, in that moment, free.

When it came time for Taye Diggs’ reading, the children gathered together on the carpet as if it were just another library story hour. Taye Diggs sat himself down on one of the little chairs and began reading from Mixed Me:

They call me Mixed-up Mike

but that name should be fixed

I’m not mixed up,

I just happen to be mixed.

As someone of Taye Diggs’ generation, I couldn’t help but be amazed by both his book and the event. Mixed race adults didn’t have children’s books that explained their biracial experiences. We weren’t in commercials or on the cover of cereal boxes. There were no mixed race events, and no one to speak on our behalf like Diggs has for his son. The event left me with no feeling of envy, however. Only a swell in my heart that this gathering is just one of many to emerge in our bourgeoning nation. It’s my hope that these children will grow into adults who don’t realize how lucky they have it because mixed race inclusion will be the norm. It may be a naive hope, but events like these prove we’re moving in the right direction. 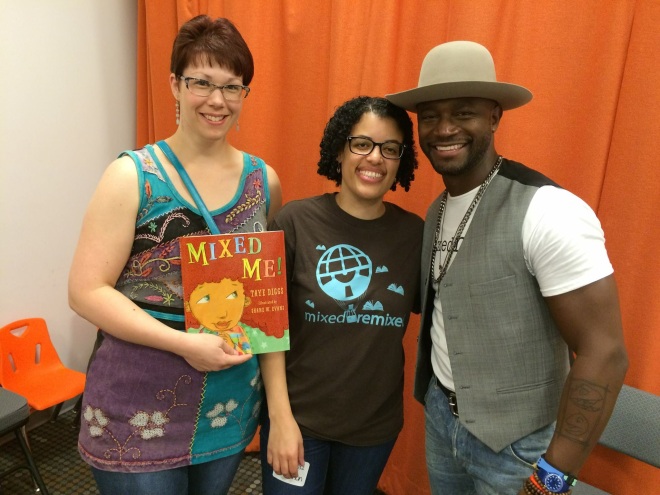